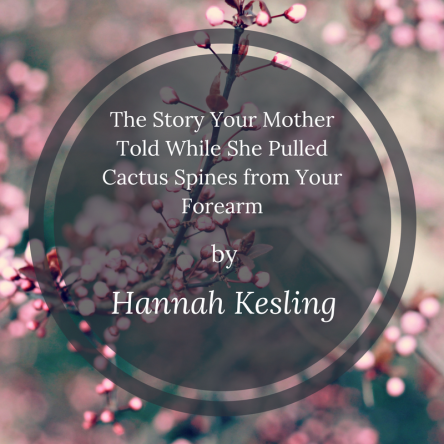 When god conceived the cactus, he was already pregnant with the desert.

He felt the sands gust in his abdomen, so he swallowed the bones of seven birds.

The first was the roadrunner’s long neck, which darted

The second was the sandpiper’s beak, which fell like a stone

and left a streak of clean air in its wake.

Then a barn owl flew into god’s electric fan and was decapitated. God took the head

and removed the plumage with forceps and fingers. He swallowed the skull, brain and all, while it was still bloody.

The fourth was the hummingbird’s wings. They spun through the storm

gathering sand, and settled at the base of god’s uterus.

The fifth was the turkey vulture’s sternum, which god

found cracked in his driveway.

The sixth was the grebe’s wish bone—god remains

silent on the subject of wish-making.

Finally, he swallowed a pigeon (the dove’s dirty cousin

who knows there is no peace).

When he was full, he took a glass of sun tea from the window sill, and drank.

When it rains it washes the air. It rained tea in the desert

and the sand settled over the hollow bird-bones,

which took root in every direction, grew spines, and flowered. 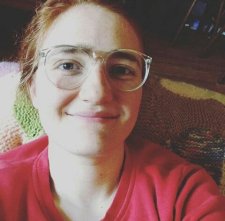 Hannah Thompson grew up in Western Washington, in a town known by the local police as Methlehem. They’ve spent years trying to leave this place behind, but it returns again and again in their dreams, worldview, and poetry. They graduated from Lewis & Clark College with a BA in English in 2013 and they’re currently pursuing an MFA in poetry writing. During the Summer they live in Portland, Oregon with their spouse and two cats. Find their work in T(OUR) Magazine, Oregon Poetic Voices, Talking Earth, and Gobshite Quarterly.