When you grow up, who you were as a teenager either takes on a mythical importance or it’s completely laughable. I wanted to be the kind of person who wiped those years away; instead, I feared, they defined me.

“I feel weird saying this,” Claire said to me the day before our book club

meeting, “but did Marlena kind of remind you of us?”

It did remind me of us, years ago. Two teenage girls: one blonde, one brunette, together rotating between both their families’ homes like an inseparable unit, like salt and pepper shakers. Sharing cozy heat beneath a blanket, covering for each other, hiding from the world and its horrifying truths. That’s where the similarities end, though—Claire and I did not grow up in a meth house in Northern Michigan and one of us is not dead. But that’s the magic of Julie Buntin’s Marlena. The friendship at the novel’s center is familiar. It is known. It is nostalgic, that magical feeling Buntin writes is a “disease responsible for suicides, the appearance of ghosts, the arrival of disembodied voices.”

The story toggles between present-day New York and the year the girls spent as next-door neighbors in dreary Michigan. From the outset, the reader knows that, by the end of that year, Marlena will die by drowning in shallow, icy water in the woods. Cat, now an adult living in New York, is haunted by her friend’s death, and oscillates between ruminating on her complicity in it and drinking to dull the pain of her loss. Cat’s voice is a wintry stew of self-hatred—as she knocks back a series of daytime martinis, she tells us, “Two fat green olives drowned on the plastic spear. I ate them last, so tight with gin that they bit me back.”

When Cat receives a call from Marlena’s brother Sal, she is plunged even further into her well of memories. If this story suffers from one weakness, it’s in the sometimes watery current-day plot—this visit, ultimately, doesn’t offer the payoff the story’s meaty middle seems to warrant. But perhaps this is intentional, as it mirrors the nature of loss and grief, which always leave you wanting.

Instead, the tension is built from the dramatic irony in Cat’s narration, as well as the seemingly insurmountable differences between the two girls that become clear as the story progresses. Marlena is a moody, pill-popping daughter of a local meth cook and trades sexual favors for Oxy. Cat falls in love with Marlena’s dangerous world, losing herself in it: “Those days were so big and electric that they swallowed the future and the past.” Cat is acting out against her own family’s issues—namely, her parents’ recent divorce. But her life with her loving (albeit slightly distracted) mother is a domestic dream compared to Marlena’s. This is the same divide that Cat fears blinded her to the opportunity to save Marlena. Within this tension lives the novel’s most interesting questions. At age fifteen, what can one be held responsible for? Must a friend say something if she sees something? Can a troubled soul be saved? And can a teenage best friendship, however brief, also be a sort of first love? 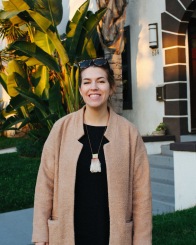 Purchase a copy of the reviewed book through our associate link and help support the journal!