Titus stood on the stone patio in his backyard, a pair of tongs in one hand, watching Caleb, Robbie and Megan. The three teenagers were sitting in the gazebo talking. He hadn’t seen Caleb look so happy in a very long time.

Titus turned to see Grace coming through his back door, carrying a large canvas bag and a bottle of wine. He helped her unload the bag, placing a large salad, a steaming bowl of mashed potatoes, and various bottles of salad dressing on the patio table.

“The steaks will be done soon,” Titus told her. “Where’s Brady?”

“He pulled up right behind me,” Grace answered, kissing him on the cheek.

“The usual. Thank God it’s Friday.” Grace uncorked the bottle of wine, and poured them both a glass.

“It’s been a long week,” Titus agreed. “I was looking forward to this all day, though.”

“Me, too. The steaks alone were worth the trip.” Grace eyed the grill. “I’m starving.”

The back door opened, and Brady came through, grinning. “Party’s here!”

He set two six packs of beer on the table, and a chocolate cake.

“It is.” Brady waved his hand at the cake with a flourish.

“You made that?” Titus cast a skeptical eye at the perfect cake.

“But of course,” Brady grinned, and popped the top off a bottle of beer.

“I call BS,” Grace said, pulling out the chair next to him. “Your mama make it?”

“That sounds more like it.” Titus smiled, taking steaks off the grill. “At least it will be edible.”

“Just waiting on Travis and Haley.” Titus placed the platter of meat on the table. “They should be here any minute.”

Brady finished off his beer and reached for another, “Man, that makes me feel old.”

“You and me both,” Titus agreed. Leaning his head in the direction of Caleb and his friends, he added, “I think someone else has a girlfriend, too.”

“Sure thing, Mom,” Brady nodded. He then yelled, “Hey, Caleb! Come introduce your girlfriend to your Uncle Brady.”

“Nice.” Grace rolled her eyes. “I can see his face turning red from here.”

As the three teenagers came over, Titus admonished his friend, “Seriously, don’t embarrass him.”

“Hey, guys,” Caleb said as they approached the adults.

“Hey, Caleb.” Grace gave him a hug, and waved at his friends. “How are you, Robbie?”

“I’m good.” Robbie stood with his hands shoved in his pockets. He had maintained a crush on Caleb’s uncle’s best friend since he was eight years old.

“And who’s this lovely lady?” Brady smiled at Megan.

“That’s not creepy at all,” Grace spoke into her wine glass.

“This is Megan.” Caleb smiled. “She’s staying with her papaw for the summer.” Turning to his friend, he said, “Megan, this is Uncle Titus’ best friends, Brady and Grace.”

“Nice to meet you.” Megan smiled at them.

“Pleasure’s all mine.” Brady shook her hand. “Can I get you anything? A beer? Glass of wine?”

“How about a soda?” Grace handed the kids each a cold can of soda from the cooler beside of her.

As she was distributing the drinks, Travis and Haley arrived, and introductions were repeated. Titus got everyone settled at the patio table and the second small table he set up at the end. As everyone began eating, he said, “I have an announcement to make.”

“You’re pregnant!” Brady exclaimed, his eyes wide in mock excitement. “I knew it!” Turning to Caleb beside of him, he grabbed his arm and said, “Oh, my goodness, I knew he was glowing. Isn’t he?”

Caleb laughed and started to choke on his food. Brady thumped him on the back, while Megan giggled beside him.

“Did your mother drop you on your head as an infant?” Grace looked at Brady with disdain.

“What?” Brady asked. Looking at the kids, he asked, “He’s not pregnant?”

The kids just laughed at him, and Titus cleared his throat with an affected, “ahem.”

“Oh, sorry,” Brady apologized to Titus with a smile, “what was it you wanted to announce?”

“What I wanted to say is,” Titus looked expectantly around the tables, “I accepted an offer on the house today!”

“I know!” Titus was obviously relieved.

“Congratulations, Man.” Brady fist-bumped his friend across the table.

“Yeah,” Titus nodded, “but we have to find a house first. I’ve already set it up with the realtor for me, you and Trav to go look at houses in Knoxville Sunday afternoon.”

Caleb nodded, glancing at his brother to gauge his reaction to the news. Travis didn’t look excited at all, but he wasn’t angry.

“Don’t worry, Trav,” Titus said to his nephew, “you and Haley can keep the roads hot between here and Knoxville.”

“Well, I think this is awesome for everyone. You guys can all use a fresh start, and I am thrilled to have you guys closer to me.” Grace raised her glass in the air, “To new beginnings.”

Everyone else raised their glasses, bottles, and cans, and echoed the toast. Titus looked at his family, and smiled. Things were finally starting to look up.

After saying goodbye to his friends and giving Robbie and Megan a ride home, Titus poured the last bit of wine into a glass and sank into the sofa beside of Caleb. He groaned, and said, “Man, I’m tired.”

“You must be getting old,” Caleb offered.

Titus glanced at his nephew whose eyes were glued to the T.V. “I’m glad you enjoyed yourself.” Grinning, he added, “It looked like you were enjoying yourself on Megan’s doorstep.”

“Shut up!” Caleb couldn’t wipe the grin off his face.

“So, is she your girlfriend or what?

Titus reached over and ruffled his hair.

Titus nodded. “Yeah. I really am.”

Caleb looked at his uncle and said, “Me, too.”

“Good.” Titus sipped his wine for a few minutes, watching Caleb’s sitcom with him, until his phone buzzed in his pocket.

Pulling it out, he read the screen. It was a text from Jamie. Grace told me about your good news. Congratulations!

Titus texted back, Thanks!

After a moment, his phone buzzed again, and a slow smile spread across his face as Titus read, I miss you. Can we get together sometime soon and talk? 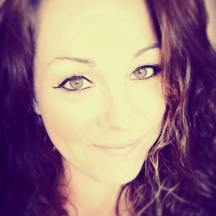