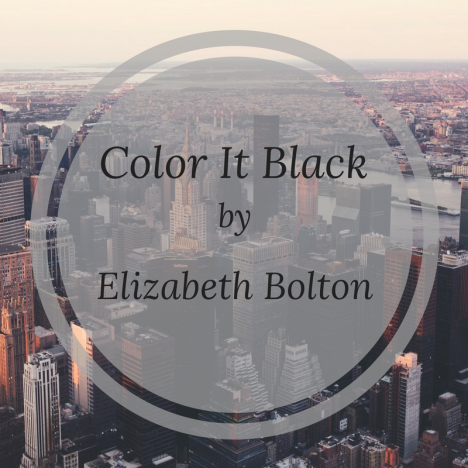 One thing she begged of him was that he should never love her in that emulative way, that way in which young people do celebrities which causes them to imitate their styles of dress and speech. She never begged it out loud, though, because she couldn’t find the way of saying it that was empty of insult.

“I could never be married to a writer,” she gushed, and as soon as she said it she knew it had been a bit too much, over-emotional, performative even, but then she’d meant for it to be. She crawled towards him at the head of the bed, balancing a small glass of beer in one hand, curled her body in next to his and rubbed the inside of his thigh.

“This young man has submitted his manuscript,” whined Leonard Woolf from the television. “I found three errors of fact and two spelling mistakes and I’m not yet on page four. Had breakfast?”

Elizabeth had gone out of the usual confines of Netflix and rented The Hours on iTunes, for four dollars and ninety-nine cents. The day had been difficult for her, routine for him, and the film, she’d thought, might serve as a prop, a means of ensuring that her husband would know how she felt about men who wrote, or rather, men who aspired to be writers.

“See,” Elizabeth swallowed a sip of beer and motioned towards the screen with her glass, “she’s Virginia Woolf, and that’s her husband, Leonard. He’s a publisher.”

“No, no, the actress is Nicole Kidman, but she’s got a big fake nose, see. Virginia Woolf was a writer.”

“Very,” she answered. Her voice was solemn. She was sad that he had asked the question. “She wrote A Room of One’s Own which is a book I loved very much and she said that any woman who wants to write well needs a room to herself and a small, steady income which is important for me because that’s just what I got for myself by moving to Canada and I did it all on purpose and it saved my life and it’s the reason I’m a writer now.” The words came out in one breathy exhale. She looked around her one-room studio apartment then, took in the way his messes of clothing and piles of devices with tangled wires punctuated the corners of her square-edged neatness and realized with embarrassment that it was no longer her own room. She hadn’t meant anything nasty by the comment, but it had left a bad taste in the air. She swallowed another sip of beer and turned to face the television again. Nicole Kidman as Virginia Woolf’s body floated downstream, undulating and natural as a fish. The camera focused on the slipper of her right foot, caught on a stone and pried gently out of place. The body drifted on, missing a shoe.

It had been a cold, February day during one of Toronto’s harsher winters. Phillip wasn’t yet working. He awaited the arrival of his work permit; that had been his business for the past five months. They’d stopped by the superintendent’s office in the lobby to deliver the rent check and cancel the parking space. He still hadn’t put the new engine in the Subaru and brought it out from California. They’d asked, too, to be placed on the waitlist for a one-bedroom, facing the other way, with the CN Tower view. At the moment, their fourth-floor view opened out into the windows of the building next door.

“No baby yet?” the superintendent had smiled. She was a sweet, tiny woman from Romania who, from behind, looked no older than twelve.

“No, no,” they laughed and looked at their feet.

“You know, enjoy the life now because, when baby come – ” she drew a line across her neck with a finger, “all finished.”

They both laughed what seemed a little too loud. It might have been funny if they had not heard the same warning many times before. The superintendent was such a nice woman; even on your worst days you couldn’t talk to her without infusing some artificial joviality into your voice.

“Try with dog, first, like, practice, you know, get up in the night, dog have to go out, you have to get up, just like baby.”

They smiled at that. They had talked about getting dogs before.

“I’d like to get a Welsh Corgi, and name it Queen Elizabeth,” Elizabeth said later as they hiked up the four flights of stairs. They always took the stairs for exercise. Elizabeth took the elevator whenever Phillip wasn’t with her.

“I should start working, first, before we start piling on expenses,” Phillip replied curtly.

“Oh my god, relax,” Elizabeth snapped in return. He was always complaining about what was left in his checking account, how he didn’t want to “dip into the nest egg” as he put it, how he couldn’t stand waiting around for the work permit to arrive. Mail from immigration services had arrived already, with the devastating news that his work permit application was being sent back because it was missing certain materials. It didn’t say which. Phillip had had to compile the whole thing all over again. Elizabeth knew that if the task had been her own, she’d have done it to perfection. She couldn’t understand that part deep inside of her that was, in spite of her self-declared expertise, so resistant to helping him with it. Since that day Phillip had been unable to stand any talk of the work permit, and Elizabeth couldn’t stand it either, watching a man, her husband, watch Netflix at eleven o’clock in the morning on a Tuesday.

“How can you bear it, watching television so early in the day?” she’d asked him. “I’d get so depressed.”

She had encouraged him to read or write instead, and almost immediately regretted it. He read her books, from her bookshelf, scribbled in a hardcover journal purchased from her University of Toronto student store. On seeing him write she recalled how much she despised the sight of a man scrawling his feelings out and into a journal. And she had married this one.

“Maybe I’ll write a story,” he said brightly one morning.

“Write whatever you want, and decide what it is after you’ve finished,” she shrugged, ashamed of the disgust in her voice. She wished then that he would watch Netflix again. That had been better. The scratching of the pen was unbearable; she could hear it even when she didn’t look, as though he were competing, and she knew that he was. Phillip competed with everyone, over everything, competed with dinner recipes they found online by tweaking the ingredients which for him meant adding a bit too much of everything and cutting corners where possible and she hated it, the way he’d wreck a dish and nod with his mouth full, “Good, right?”

“Mmm,” she would nod, certain she could have done better. And it wasn’t just the matter of following directions; it was the matter of respecting them. In any art one could not successfully break rules until one had first mastered them, she’d always lived by this. She’d married someone with no regard for the wisdom by which she had structured her entire life, someone doomed to screw up everything which called for precision unless he could be somehow tricked into doing things the right way.

“I was thinking, maybe we should try putting the pasta in after the water boils,” she’d once suggested, as though it were just a thought she’d had. “Maybe then it would turn out less…gummy.” And of course she’d been right. And he had added non-gummy pasta to his repertoire of meals. Was she to lead an entire life this way?

“I rented a movie I want to watch today,” she said later that day after they’d come upstairs from the superintendent’s office. “I think it’s sad, but you might like it…or, you might like the music anyway.”

He agreed to watch it with her, as he agreed to do everything she did even when he wasn’t asked. She tried very hard to see this as a merit.

Phillip pointed to a little boy on the screen, chasing after his mother’s car, screaming, “Mommy! Mommy!” His childish intuition had led him to a grave and certain conclusion: his mother was off to kill herself with the pills that rattled in the glass bottles inside her purse. “My brother was like that,” Phillip blurted, “always after attention. He used to sleep in my parents’ bedroom all the time. I never did that.” Phillip’s brother Nico was a recovering meth addict who relapsed every two weeks or so.

“Well,” Elizabeth tried to maintain the calm in her voice, “it sounds like your brother was…sensitive, fearful maybe, not necessarily seeking attention on purpose. I mean, the more I get to know your brother, the more I think, he should have been an artist.” Nico had been diagnosed with type 1 bipolar disorder, like Elizabeth. “Maybe he should take an art class or something,” she suggested quietly.

“Yeah…he’s all fucked up right now though, he’d just relapse and stop going. He draws, though. He likes to copy things, you know, look at a piece of art and try and copy it.” Nico had drawn them an impeccable Snoopy and Woodstock Christmas card.

Elizabeth brightened suddenly with an idea, “You should send him some of those adult coloring books they have, you know, the ones they have at Indigo, have you seen them? I’ve got a few,” she stopped mid-sentence, leapt from the bed and pulled from the bottom of the bookshelf The Colors of Anna Karenina.

“Don’t laugh,” she said as she held the thick-paged book out to him. “I tried some, but they’re awful.”

Phillip thumbed through the pages and smiled. He stopped on a drawing of Vronsky, kneeling, with Anna’s gloved hand in his. “It’s good,” he chuckled. It was horrible, she knew. That was why she hadn’t bothered to finish coloring the page. It looked wrong. You could see all the directions of the haphazard colored pencil lines like bones poking through skin. Adult coloring books had been a trendy relaxation method to hit bookstores a few years before, and Elizabeth had given them a try when her cousin Esther had bought her Anna Karenina and a box of pencils for her birthday. She’d quickly abandoned the practice and shelved the books away, off-put by the imperfections in something that should have been easy.

“But, you colored his hair the wrong color, see?” Phillip pointed.

“It should be red,” he grinned. A rust-colored curl stuck out in front of his ear. She gave it a soft tug. She’d colored Vronsky’s hair black. She rubbed her nose back and forth across her husband’s warm shoulder and kissed it. Of all the books to pull off the shelf today, she thought. Phillip had never read Anna Karenina.

“I’m so glad you’re not a writer,” she said again, and they watched a fountain pen nib on the screen bend against coarse, yellow paper and trail its oil-slick ink. The sound of the scratching was delicious.

“But, you don’t mind when I’m…writing, do you?” he asked, his voice was light, buoyed by a desire for approval.

“Of course not,” she wrapped her hands like paws around his left bicep and felt their tininess there. She was glad they had talked about it.

Elizabeth is a doctoral researcher of transformational, poetic literacy practices at the University of Toronto. She is originally from Menlo Park, California and was once a Classical scholar at U.C. Berkeley, where she earned her bachelor’s degree. She now lives in Toronto with her husband and in addition to academic research writes narrative, poetry and hybrid works. Connect with her online and on Twitter: @The_Boltron