The first time I held my daughter only one thought went through my mind: how did I ever create something so beautiful? I was thirty-four when I had Harper and until I met my husband just two years before, I wanted nothing to do with motherhood. To me being a parent meant the end of who you were, your freedom, and your spontaneity. Once that motherly shift took place I found getting pregnant to be difficult. I thought in some way this was payback for all the times I had silently prayed that a pregnancy scare would end up being just that, a scare.

When I found out I was pregnant, the elation was second to fear that something bad would happen. As the first trimester came and went, I found myself becoming everything I always snubbed as a young woman in her twenties and early thirties. I was a mother to be. I began reading everything I could find about pregnancy: daily, weekly, and through each trimester. I bombarded my doctor with questions, because the reality was that I was over thirty and a first time mother. I was aware of the research, the statistics, and the unnerving stories of how difficult it is raising children the older you get. Although these pieces of information stayed dormant in the back of my mind, I was already in this and was filling the nursery with books, stuffed animals and gifts picked up and given along the way.

Once my daughter was born, I realized what true anxiety and fear really was. For the first time in my life there was something larger than myself that I was responsible for and did, in fact, love more than I thought I had the ability to give. Part of the six week maternity leave that I had embarked on was not only getting to know this 6 pound little girl but getting to know myself as a mother. It was more than training my body to wake every two or three hours at night and more than training myself to sleep during the day when she did so that I would have enough energy to carry on the rest of the day. It was about finding the balance between who I was and who I am. At four weeks old, I took Harper to the high school where I work to of course show her off, but to also feel like a teacher and part of the functioning work force. To say yes I have a child who depends on me for everything but I am still a working woman. As I sat in my faculty department meeting, that I had invited myself to much to my department chair’s discouragement, I felt part of something. I watched as others gloated on my beautiful baby and sat there incredibly focused on a world that would never again be a part of me like it once was.

The mixture of resentment and sadness boiled over as I returned to work that winter. She owned the largest part of my heart and mind and I would never again be the person I once was. I was torn between giving her everything I never had growing up, particularly the example of a working mother, and feeling like every minute I was not with her was a lost moment of admiring her existence.

As the school year came to an end, I embarked on my first summer as a mom. Summers are usually a time for me to rest and write. I would not write a word for the next two years. As the experiences of being a first time mother, and one in her mid thirties, happened I was consistently in a state of wanting to document every thought, memory and feeling. Instead I lived in the moment and processed them in the few minutes I had to myself. The reflections that would come to me always involved the same overarching theme: the difference between being a first time parent in your twenties versus your thirties.

I think back of my mentality and state of being in my twenties. A mixture of mistakes, regret, and loneliness. But that is what your twenties are about. Finding your way and hopefully coming out on top. Never could I have raised her in a sustained and blooming environment in which she deserves. So here I find myself. Not that I have it all together by any means, but I think back about all of the negative rhetoric that was thrusted upon me and at times I thrusted upon myself. This job is exhausting, relentless and at times without any acknowledgment that it is being done right, but my reality is the opposite of what I was told. I hold an energy within me that I have never held before. It comes with a glow, an abundance of energy and a happiness that matches no other. I am older true, but decisions for my child arise from the combination of instinct and lessons learned. From what is right and a better understanding of the world around me. I look at the face of a three year old look at me for assurance in this world but also as a mirror to be held up to her face and show her what she wants to be. It is the heaviest of responsibilities and one I would have shied away from once upon a time. The thing about being the mother of a young child in my mid thirties is that I have been there, done that and never for a second wish I was anywhere else than where I am. 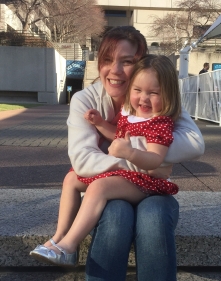 Amanda Felice Collier was born in New Jersey and raised a Midwestern girl in Saint Joseph, Missouri. She has been an educator for seven years teaching college writing and high school English. Though she has always loved to write fiction and poetry, it was the personal essay where she found her voice. Her works have been published in Halfway Down the Stairs, Commonline Journal, and Connotation Press to name a few. This is her first published piece since the birth of her daughter who has inspired her to keep writing and sharing her voice.