I was more interested in going to the homecoming dance than I was in Brad, the senior who invited me.  It was my first year of high school, tenth grade, and Brad was a good-looking trumpet player who sat first chair.  I had a perfect view of him from my vantage point in the percussion section where I played bells and chimes.  I was still new to the school and not particularly interested in any one guy yet.  But at fifteen I was excited about my first high school dance.

What was I going to wear?  Mama had an idea – she would make me a chocolate brown velvet dress lined with pearl trim at the scoop neck and edges of the puffed sleeves.

The pattern looked good, the A-line shape just right for me, the fabric was practically delicious.  And those little pearls!  All around the neck and the edges of the sleeves.  It was going to be perfect!

I watched as she pinned the tissue-thin pattern to the velvet, then seeing her struggle with the scissors, I helped her cut out the pieces that would be transformed into my dress.  The sewing machine whirred as she put the garment together.  In a ritual from years past, I stood on a stool turning slowly as she marked the hem, holding between her lips pins that she pulled and maneuvered one-by-one across the bottom.

With every step I became more and more excited.  My first homecoming dance in high school, wearing this dress.  I couldn’t wait.

Two years earlier, in the summer between seventh and eighth grade my mother’s right hand started doing funny things.  When she scrambled eggs for breakfast, her hand would fly up, spatula still in her grip.  Her perfect slanted penmanship became oddly upright with wobbly edges.  One day I walked into the living room midmorning to find her in Daddy’s brown leather recliner, her left eye very puffy and red.  Our cat Pit-a-Pat purred in her lap.

“What happened?”  I couldn’t stand to see her hurting.

“I accidentally sprayed my deodorant in my eye,” she said with a laugh.  I giggled with her, but then did what I could to help her around the house that day. Never one to slack off, she was soon going about her business like usual, and in a few days her eye was back to normal.

On a Sunday afternoon that August we were all at the picnic table on the patio, finishing up bowls of homemade ice cream that Mama had cooked and Daddy had churned.  The relaxing, end-of-summer mood tightened when Daddy said, “Girls, we need to discuss something important.”  The tone in his voice was serious but not like we were in trouble or anything.

“Your mother is going to the hospital tomorrow.”

I blurted out the first thing that came to my thirteen-year-old mind.  “Is she pregnant?”

Mama and Daddy both laughed at that.

“No. They’re just going to run some tests to see why her hand has been doing what it has.  You’ve noticed that, haven’t you?”  He glanced around at we three daughters.  We murmured yes, nodding.

“Are you going to be ok?” Ann’s face furrowed as turned toward Mama.

“Yes, Sweetheart, I’m fine.” Her smile was reassuring, but still.

I had fretted over my parents’ health for years. When I was six or seven I used to torture myself with worry that something would happen to one or both of my parents, afraid they would die.  I remember crying myself to sleep with that irrational thought in my mind, my parents very much young and healthy, laughing at Carol Burnett in the living room while I sniffled down the hall in my bed.

One Sunday afternoon around this time, though, Daddy thought he was having a heart attack, right in the middle of the busiest season at the family jewelry store.  My grandparents came over to stay with us while Mama took Daddy to the emergency room.  I worried and prayed and prayed and worried.  “Please, God, let Daddy be ok.”  We all seemed to hover in the living room where we had a good view of the street and driveway, watching for them to come home.  A few hours later the car pulled in and we raced to open the backdoor by the garage.

Both were smiling.  “It’s just the flu.”

A week or so before the homecoming dance Mama said, “We need to go get you some shoes, and I have just the thing in mind.”

My mother’s taste was exquisite, so I didn’t doubt her as we walked into Butler Shoes, the only game in town for shoes dyed to match prom dresses and other festive wear.  Mama asked the clerk about dying a pair chocolate brown in time for the dance.

“We would have to special order the dye,” he said, “and we don’t have time to get it in before the dance.

Mama looked at me and thought for a minute.  “Gold pumps will look gorgeous with this dress.”

“Ooh..kay …, but can I try on those cute platforms while we’re at it?”

Mama glanced at the shoes I was pointing toward.  “Yes, but I think you’re going to like the gold pumps.”

I didn’t like the gold pumps.  But Mama being Mama and me being me, I said yes and remembered how thankful I was to have such a beautiful dress.  I tried to forget about the shoes.

While Mama was in the hospital we stayed at my grandparents’ house up the street.  It was just easier that way – my grandfather watched us during the day, my grandmother cooked for us each evening. It wasn’t much different than when my parents went on their yearly get-away, just the two of them.  Except this time Daddy was there with us, when he got in from the hospital where he went every night after closing the store.

One morning I awoke to hear Daddy on the phone down the hall.  I couldn’t tell what he was saying, but it sounded like he was crying.  He left before breakfast to get to the hospital.  Things were tense that day.

Later we learned that the doctors thought my mother had a tumor and only days to live, but they wanted to do another test and needed his permission. That results showed constriction in an artery in her brain.  She wasn’t out of the woods, but it was treatable.

When school started we went back to our house where now my older sister, Nora, home from college for the summer, did the cooking.  Mama was to be in the hospital a couple more weeks, then discharged with instructions that she not be irritated, and that her surroundings remain calm.  Daddy installed a window-unit air conditioner in their bedroom so she could have a cool place to rest.  My sisters and I tried to be on our best behavior and not fuss or fight with each other over anything.

Mama had been born left-hand dominant, and when she started school they insisted she write with her right, as was the custom at that time.  Now she switched back to left-handedness.  Her right hand never regained the control it once had, but blood thinners kept clots at bay.  Gradually we returned to normal, but this episode never left my awareness, manifest in an overall sense of protectiveness toward her.

With a homecoming win I was sure the mood at the dance would be festive.  Brad arrived to pick me up, florist box in hand.  He complimented my dress as we pinned on the homecoming bouquet. It was the first time I’d been on a date with a guy who could drive, and I wanted to act mature enough to be seen with this senior.

Brad parked outside the National Guard Armory and we went in to find streamers and balloons floating above the dance floor, a DJ spinning Top-40 tunes.   Bleachers had been installed around the edges for the dance, so we found a spot and watched a minute or two before hitting the floor.

My dressed swayed in its velvet and pearls as we grooved to the music.  I looked down at those gold shoes. Maybe they didn’t feel right – I usually danced barefoot to the stereo in the living room.  “I’ll be right back” I said as Brad leaned down to hear me.  Then I ran back to the bleachers, kicked off the gold pumps, and shoved them under our seats, done with them. Ahh, that felt better.

Those shoes never made it home.

“Did you have a good time?” Mama was waiting up on the sofa when I walked in after a quick kiss from Brad at the front door.

“It was great!”  I was glowing from dancing, music still in my ears, velvet between my fingertips.

We went to the kitchen for a glass of milk and Mama noticed my feet.  “What happened to your shoes?”

Busted.  Too naïve to maneuver a reasonable explanation.

“Oh!”  I looked down. “I must have left them at the dance.”  Knowing full well that I did.

“That’s ok. I’m glad you had a good time.”  Mama followed me down the hall.  “Good night.  Sleep tight.  Don’t let the bedbugs bite.” She hugged me then turned, her robe flowing behind her to their bedroom.

Sometimes we make a conscious decision to lose something; other times, we’re shocked when it happens.  It was a little more than a decade later that the constricted artery in Mama’s brain led to a sudden fatal stroke. She had been resting on the same sofa where I saw her waiting for me when I walked in, shoeless, from the homecoming dance.

One Christmas – we didn’t know it was her last – my sisters and I opened gift boxes to find blouses with matching sweaters made of knit fabric – mine was a soft green set.  No longer able to do the detailed stitching to make a blouse, Mama had bought those.  But the sweaters were the last clothes our mother made for us. Nearly four decades later, mine is still in my closet. 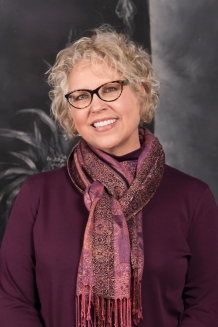 Courtney Gulbro has returned to writing after a career as a counselor and counselor educator.  She has lived and worked around the world in places such as Kwajalein in the Marshall Islands, Humboldt County, CA, Atlanta and Savannah, GA, Germany, and Japan, and now lives in her hometown of Huntsville, Alabama.  Connect with her on Instagram at cgulbro and on Twitter at @chgulbro