The first man and the first woman

in a beautiful garden

with trees of fruit and fire.

Yet their open hands reached

first for one another.

Love, a mountain springing up between them

and the woman found herself

Sensing the weight of angel eyes gazing down,

yet hearing the serpent’s laughing hiss through the leaves.

At the end, when they found themselves

she fell in the dirt and cried

remembering how it had tasted.

And he knelt behind her, his hand on her hand

where it held the curve of her belly

one over one, over one. 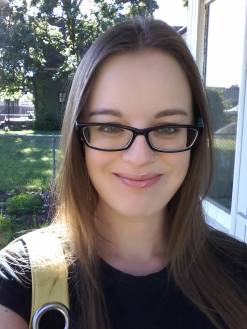 LeAnn Bjerken is a poet, and journalist from rural Minnesota, who currently resides in Spokane, Washington. She graduated from Eastern Washington University in 2014 with a master’s degree in creative writing, and now works as a reporter for the Spokane Journal of Business. Her poetry has appeared in Miracle Magazine, The Inlander, and several online magazines including; Devilfish Review, The Artistic Muse, The Lake, and Fox Adoption Magazine. When not out seeking inspiration, she can usually be found snuggling with her husband Steve or their cat Tikki. LeAnn’s news articles can be read online at http://www.spokanejournal.com/