Are always his truck

With frost growing on the windows

Waiting for your vehicles to warm up

Any chance to spend time together

Breathing into your mittens

Sitting together and laughing

Over nothing and everything

Sometimes he scrapes the ice

Off your car windows.

It warms your heart.

Going on walks as the sun

Stays up longer and warmer

Getting slushees at the Shell

Going to the local slough

Dipping your toes in the water

Sly looks at each other

To look at plants and birds

With the buzz of mosquitos

Camping together where you

Race bikes down the dirt roads

Fishing on the lake from a cramped tin boat

Dropping goldfish crackers into the water

Laughing so hard your face hurt.

Night time around the fire

Warm with your family and him

Happier than you think you can

Fall comes early in the prairies

The leaves are already dead and yellow

On the ground in September.

To see the class lists

When he wasn’t in yours.

Craning your neck in the hallways

Looking for his hair

Always finding an excuse to walk

Playing games of M.A.S.H. where

You always end together.

You still remember being 8 years old

Assigned to a science project with him

It was the most excited you’d ever been 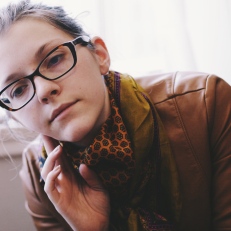 Kristen McLaughlin was born and raised in Grande Prairie, Alberta, where the surrounding northern prairie landscape became a large influence in her work. After a stint of living in Vancouver and getting her degree in archaeology, she is currently in Toronto, Ontario, where she is finishing her master’s degree in museum studies. Kristen is also a photographer, a flautist, a traveler, and a warm-weather creature who simply enjoys storytelling in a variety of forms. This is Kristen’s first publication and she hopes to continue to write honestly and without fear. You can find her on Twitter at @kris10mclaugh