Taylor Swift blares from the U-Haul’s radio, and we immediately burst into song, switching the lyric without needing to confer: I’m feeling twenty-FIVE, oh, oo. My partner grins at our telepathy, then comments: “Partner, really, don’t quit your day job.”  I laugh; continue to sing, happily off-key.

We’re packed into a 14-foot U-Haul, speeding up the West Side Highway at 7:30 am on a Saturday in May.  We’re driving uptown to our education start-up’s second-annual celebration, loaded with a piano, a red carpet, and over 200 student-designed poster boards.  The world emerges hazy and cloudy, the solitary West Side Highway free of cars.  It’s the kind of flat, horizontal morning that makes you believe that if you drive long enough, the gray of the sky will eventually meet the gray of the pavement.

J.P.  looks at me, locks my eyes with his soft, brown ones and says, sincerely, “I’m really glad you’re here, partner.”

“Me, too, partner,” I respond immediately, squeezing his forearm.

“Even though you’re a lousy accompanist,” he adds, his eyes twinkling. I giggle, attempt again to hit the high notes, “oh oo.”

The day job comment is no joke, not because I’m a good singer – I’m awful – but because, without our day jobs, our partnership would not exist.  For the past two years, J.P.  and I have been Dream Directors at low-income public high schools, mobilizing the next generation to articulate their dreams, and then, through our support and assistance, actualize them.  Although the work is rewarding, it can also be emotionally draining and seem infinite in its scope, the confines of the traditional “day job” disregarded in the 24/7 craze of starting up a start-up.

For the past two years, J.P.  and I have been each other’s go-to companion, available at all times, to troubleshoot about a frustrating student, collaborate for a school-wide event, or prep each other for a high-stakes meeting with the co-founders.  We’ve witnessed and aided in each other’s personal and professional growth, as members of a young team navigating the landscape of social entrepreneurship and as newbies in schools desperately trying to serve their below-grade-level students.  Our fast friendship quickly eroded any separation between the personal and the professional.

We started calling each other partner my first week on the job, when I was overwhelmed at an especially stressful meeting and surreptitiously sent him a text across the table, asking: Maybe we can partner up and you can help me out with all of this?

The nickname stuck, for better or for worse.

I’m not sure how I landed on that term, that day, or even how we took to it so universally, answering each other’s calls, Yo, partner, ending long emails oh partner my partner, allowing it to constantly pepper our dialogues.  It must have been floating around my lexicon; the word partner commonly used nowadays as a genderless term for a same-sex partnership or, for heterosexual couples, as a means to ambiguate their sexuality to stand as gay allies. Both of its current uses refer to an intimate, physical relationship: a feature notably absent in ours.

For all of the times we’ve been asked, by strangers, high-school students, and even by our close friends, “Are you guys together?” J.P.  and I are not. We’ve never even kissed.  We have hour-long conversations repeating inside jokes, call each other at midnight on New Year’s Eve, and text each other whenever we are lonely in the middle of the night: “Partner, come over?” When J.P.  decided to pierce his ear, he asked me to accompany him, so I pierced my second and third holes, too. Giggling, we immediately uploaded Instagram with our smiling faces, #partnerparts.  The transition from colleagues to best friends was effortless, ruptured only by an early-stage attraction.

At the beginning, J.P.  and I flirted our way through it, getting drunk and careening into each other on the dance floor, making suggestive comments, feigning indifference when either one of us ended the night with someone else. “Don’t shit where you eat,” my friends warned me, upon meeting the legendary J.P., and experiencing his suggestive teasing, his unblinking stare.  At the time, I was too giddy to heed their advice.

Eventually, we forced ourselves to sit down and address the sexual tension as adults, and unilaterally agreed that our work was more important than the brewing possibility of romance between us.  A relationship, amidst an over-committed 15-person team, was just too much to handle. We both had given up a lot already for our start-up and jeopardizing our close comradeship could ruin the team and our joint support system. We were certainly better off friends.  J.P.  ended those conversations, eyes glimmering, half-promising, half-teasing, We’ll have sex…eventually.

Eventually, unfortunately, has yet to come.

Once, sitting at a table with some of my high school students, J.P. ’s name came up.  Having witnessed our flirty bantering, and habitual touching, a student asked me, “So, Laura, do you have a crush on him?” My face immediately flushed, not because I still felt that way towards J.P. , but because I had felt that way.  My student naming my previous desire was an act entirely too invasive, her knowledge of my infatuation unfathomable to me and, moreover, purely unacceptable. I fled to the bathroom, overwhelmed and unable to explain to their smirking faces why mine had suddenly turned bright red. I looked at myself in the mirror.

How could I articulate to a group of 16-year olds that love can exist outside of society’s traditional archetypes? I wanted to share with them the unanticipated process of aging, how one of its complementary realizations was that the people who became your anchors in life might not be the ones you labeled boyfriend or girlfriend.  How, over the years, other gestures of intimacy can become more meaningful than kissing or sex.  I wanted to admit out loud that navigating the entrance to adulthood was stupid hard, and it made things lighter to have someone on speed dial, who you could always turn to, at any hour, whatever their label in your scrolling contact list may be.

When J.P.  turned the adult-age of 25, he hosted a potluck dinner party in his cramped one-bedroom apartment on the Lower East Side. The invitations had the evening’s schedule printed on them: 8:00 dinner, 9:00 toasts, 10:00 dancing.  Crowding around the two foldout tables that took up his entire living space were our start-up team and other close friends.

I was the last person to stand with my PBR, wobbly, overcome with emotion, slightly blushing. Saluting my partner, I said that J.P.  had, at 25, what most people spent 100 years trying to find: lifelong friends, a dream job, meaning and intent in his life, and a community of love, overflowing from his tiny apartment.  I said that I was so happy to have met him at the quarter-century, and that I’d be at his side for the next 75. J.P.  thanked me later, eyes watering, and admitted: “Partner, you were the person I wanted to be there the most tonight.”

A month after his birthday, J.P.  slept over, falling asleep with his arm flung under my bare back. It was a rare summer night in early June, and we were two sticky bodies in heat. As he slept, I lay awake, the curve of his right side meeting my tensed left side.

Neither of us had removed any clothing, but I felt especially exposed.

That evening, my partner confessed that he had decided to work only part-time for our start-up next year.  His admission, and my sudden accompanying sadness, made me wonder how much of my motivation for my job was purely to impress him, and not for the students, or the school, or even for my career. I shuddered to think of all that I had neglected over the past two years, seemingly because my job was so encompassing, but more possibly, because I was too focused on seeking the twinkly-eyed admiration of J.P. .

The realization knocked me over with its weight, while J.P.  slept peacefully beside me, in boxers. I wished that he was partner enough to know that I was still awake, upset, and that I needed him to hold me and comfort me and promise me he’d always be at my side and name me his eternal number one.

In my late-night insecurity, I was finally revealed to myself: I had been addressing my partner, but desiring a spouse. Sleeping J.P.  accepted the terms we originally established: a loving, sexless, platonic partnership. Although J.P.  may flirt with the line between best-friend-colleague and sweetheart, he upheld it, while I have furtively continued to seek its dissipation. He called us what we were, without hoping for the anything we could eventually be.

Somewhere, on that long road merging personal and professional, we had stopped walking hand in hand. Likelier, I had forged my own path, oblivious that my partner remained on the appropriate route. I had secretly held too long to the belief that, if I grasped long and far enough, I would name J.P.  my boyfriend. That, given time and support enough, my partner would evolve into the only placeholder of that sweet spot, number one: a lover.

It was in that moment that I discovered two can be the loneliest number:

laying in bed with someone I loved, who loved me, recognizing that we no longer honored the same set of intentions we had set forth for one another.

It was also in that moment that the ever possible eventually of our future rapidly sealed itself shut, grey meeting grey at the horizon.

It was late, and the windows were open, letting all of the summer sounds of the city leek through.  A car passed, slowly: a clanky crescendo up my street, the noise peaking in front of the window, then slowly sputtering as it moved away.

The serene mechanic sound made me yearn for the boxed-in security of that U-Haul, and the eternity I wanted to spend inside, giggling, chatting, forging forwards, with my partner forever at my side. 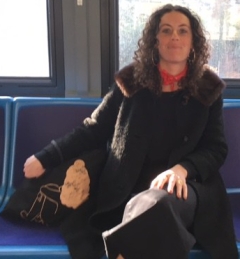 Laura Winnick is a high school English teacher, zine editor, and writer. She spends most of her time outside of school playing bananagrams and basketball (not together).