The Natural Way of Things by Charlotte Wood

This novel is a horror story, a

parable, about what our society would like to do to women it sees as fallen. Ten young women, each marked by a sex scandal with powerful men, are tricked and taken against their will to the Australian outback, where they are held against their will. An electric gate and brutal guards make sure they remain that way. They are given terrible food and rough clothes, and made to do hard labour all day. Their hair is shaved and the prison has no mirrors.

We are never told explicitly why they’ve been brought here, but we are given ideas. A minister’s moll, a football team’s night of fun, a cardinal’s sin, and so on. People known to the women are involved in their imprisonment, sneakily making arrangements for them to be taken away, and handing them over when the moment was right.

The book isn’t interested in detailed characterizations of each woman, though we do follow the points of view of two, Yolanda and Verla. It is more interested in archetypes – the woman whose body is the ground on which shame and propriety are exercised, the man in control. It also takes a look at the different approaches women take in order to survive or thrive in a misogynistic setting – they may forge their own path and be called insane in the process, they may try to win favour by behaving the way they are expected to, they may bond with each other or with the oppressor.

All the men in the novel come across badly, and this might be deliberate. This novel is an old fashioned battle cry for feminism, while reminding us that in spite of how modern we appear, some things never change. Attempts to control what a woman does with her body have always been in vogue, and harassment will continue to be called scandal.

In the beginning, when Verla tells one of the guards she needs to know where she is, he replies to her, “Oh, sweetie. You need to know what you are.” 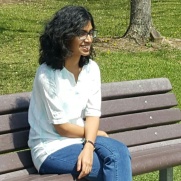 Anusha is an environmental engineer, frequently unemployed and always in search of a recycle bin. She is also a tea lover, connoisseur of smells, and thinks she is funnier in Tamil, though she has yet to get people to agree with her. She enjoys writing and hopes to keep working on her craft.

Purchase a copy of the reviewed book through our associate link and help support the journal!