Thunder clapped overhead and William jumped in his seat.  The rain was relentless, falling heavily on the windshield in torrents.  The wipers were practically useless.  He sat forward over the steering wheel, gripping the leather until his knuckles turned white.  The rational part of his brain yelled at him to pull over until the rain had stopped, but he kept going, driven on by some unknown force.  His pulse raced and a gnawing feeling twisted his stomach.  He had to see for himself.  He had to know.

A memory surfaced.  He and Serena were walking in the park when they passed a couple pushing a child in a stroller.  The child was licking an ice cream cone, chocolate melting on his lips and sticking to his fingers.  The mother had a baby in a carrier on her chest; only the top of its head was visible.  Serena watched the couple, pausing on the path, annoyed when William pulled on her hand.

“Why don’t you want children, William?”  She asked in a low voice, glancing at the family over her shoulder.  “Don’t you think it would be nice to have a family one day?”

William shrugged.  This question always bothered him.  And she asked it so often.  He knew she was hoping that he would commit, that he would ask her to marry him, that he would ultimately concede he wanted a child as well.  She squeezed his hand and looked up at him.

“I don’t have time in my life for kids,” he’d said, putting his arm around her.  “I only have time for you and my work.”  And he truly believed that himself.  The idea of having a child of his own filled him with dread.  He didn’t know what kind of father he could possibly be, and the thought of diapers and rattles and strollers and cribs was foreign to him.  Serena’s look of disappointment every time he told her this should have been a warning sign that they wouldn’t last.  Why hadn’t he seen it, he wondered as he approached the turnoff that led to his grandmother’s home.

The land surrounding the estate had once been nothing but fields and farmland.  When he was a child, it had seemed so remote; he felt like he was traveling to the ends of the earth to visit his grandmother.  Now, neighborhoods and strip malls had branched out from the city, turning the area into one sprawling suburb.  But once he turned onto the road that led to the house’s drive, the overgrown trees, thick with moss, engulfed him.  Time seemed to rewind and once again he returned to the landscape of his childhood.

He had called ahead to have the electricity turned back on, yet when William unlocked the front door and reached for the light switch, nothing happened.  “Shit,” he cursed under his breath, dragging the two bags he’d brought with him over the threshold.  A gust of air blew the door closed behind him with a loud bang and he jumped.  The sudden silence that engulfed him was unnerving.  He took a tentative step across the parquet floor.  The sound of his footfall echoed in the stillness.  All the curtains were drawn across the windows, casting the large foyer into a deep twilit gloom.

He felt his way to the kitchen, where he rummaged in a drawer for a lighter and candles.  The trees outside the windows thrashed in the continuing storm.  Their branches scraped against the window like the sound of skeletal hands.  Dark, frantic shadows danced over the aged appliances of avocado green and the rustic island made of a long chopping block.  He remembered sitting on the plastic bar stools watching Sylvie knead dough and dice vegetables at the island until his thighs stuck to the plastic seat.  With relief, William’s hands closed over a match box.  He pulled it out and struck the match against the side until a small flame wavered between his fingertips.

In the dining room, he found the candelabra that always sat in the center of the dining room table.  He lit the five tapers until the glow of light filled the room.  Collapsing into a chair, he tried to calm his nerves once and for all.

He reached into one of his bags and pulled out the manila envelope he had taken from Sylvie’s room.  He had yet to open it, and now he studied it, wondering if he wanted to see what was inside.  “Here are a few remaining articles that survived the fire and the many years since then,” the contractor had written across the top.  Taking a breath, William carefully pulled back the flap and emptied the contents onto his lap.

There was an ivory pipe, beautiful and crafted with such precision.  The artist in William loved the look of the pipe.  He knew it must have been Philip’s.  There was also a gold chain, its links small and simple.  William imagined the chain around a slender neck of pale white, surrounded by dark cascades of hair.  His heart beat faster once more.  There were a few warped pieces of silverware, a tin cup, and a comb.  He lifted the comb and stared at it closely.  It looked familiar to him, yet he couldn’t remember where he’d seen anything like it.  It was made of mother-of-pearl, with a small ruby in its center.  This was something that should belong in an antique shop or even a museum, he thought, along with the pipe.  But he knew he would never sell it, no matter how much money he could get for it.

As he put the objects aside, he realized there was something else in the envelope, something long and thin like the envelope itself.  It was a picture, a photograph.  Although the edges had been singed and the film was bubbled from exposure to heat, he could still see a woman staring back at him.  He looked briefly at her hair wrapped into a bun on her head, her almond-shaped eyes and high cheekbones.  She was very attractive, but he’d never seen her before.  He was about to put the picture away when he saw a signature on the back of the picture.  In large script there was a name:  Elizabeth Leigh Rochester.

So this was Elizabeth, his distant relation, the sad heroine of his childhood stories.  He looked at the photograph again.  This person was a woman despite the youth of her face.  The eyes that stared back at him were lifeless.  She appeared gaunt, doomed, her hands folded gently over the small bump of her stomach.  He stared at the bump, barely discernible beneath her flowing dress.  He stared and stared until his eyes began to water.

“No!”  He yelled, throwing the photograph to the floor and jumping to his feet.  She had been pregnant.  She was going to have a child . . . a baby . . . a girl she would name Rose.  Turning, William ran from the room, no longer minding the dark.  He threw open the front door and ran into the early dusk, wind lashing against his face and rain plastering his hair to his head.  “Rose!” he called as he ran down the path that led to the destroyed house.  He saw stakes in the ground and yellow caution tape but he ran past these warnings.  He ran headlong through the tape blocking the front entrance, tearing away the No Trespassing sign.  He ran without thinking into the crumbling house.  “Rose!” he called again at the foot of the grand staircase, staring up into the darkness of the second floor.

You’ve come this far, now what are you going to do? His mind asked him as he hesitated at the first strep.  Throwing caution to the wind, he continued to climb.  Rain dripped through the open gaps in the ceiling like an oozing sore.  The steps moaned beneath him.  But he finally reached the long second-story hall that led to the attic.

“Rose!”  He yelled as he dragged his exhausted limbs up the final narrow staircase to the attic.  His chest was on fire.  He fell onto the attic floorboards, breathless, staring around him.

The attic was empty.

William slid down the wall, feeling both relief and despair.  “None of it was real,” he whispered, laughing in the darkness of the attic.  His laughter grew in hysteria.  “None of it was real!”  He yelled, his voice echoing in the darkest corners of the large empty space.  Still laughing, he closed his eyes and rested his head against the wall.  “I’m going mad,” he whispered as tears fell down his cheeks.  And, realizing he was alone, he finally gave in to defeated sleep. 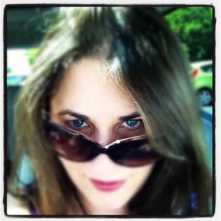 Melissa Hunter is an author and blogger from Cincinnati, Ohio.  Her articles have been published on Kveller.com and LiteraryMama.com. She is a contributing blogger to the Today Show parenting community, and her short stories have been published in the Jewish Literary Journal.  She is currently writing a novel based on her grandmother’s experiences as a Holocaust survivor and the psychological impact this had on her life. When not writing, Melissa loves spending family time with her husband and two beautiful daughters. Connect with Melissa via her website, Facebook, and on Twitter as @cleancopywriter.