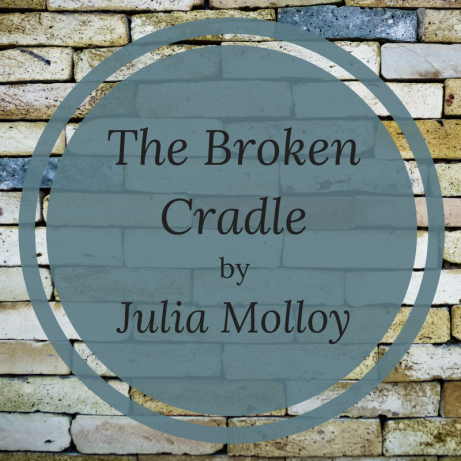 Marnie sits on the floor of her playroom and stares at the broken cradle. She has her knees hugged up to her chest and her legs are bare. A sharp red scratch runs down the side of her face, but she doesn’t remember making the mark. Her hair, forced back from her forehead, is so thick with grease it is difficult to tell its original colour. Her eyes shine a deep green in the gloom of the afternoon. Blood crusts under her fingernails.

Winter has settled into the city, and though the curtains in Marnie’s playroom are open, little light finds its way inside. The room, tucked into the apex of the roof, is triangular and low-ceilinged. Curved wood softens the edges of the walls and floor. Next to the door stands a locked chest, unopened for several years. Glass light crystals hang from the ceiling, but as darkness falls Marnie makes no move to turn them on. Her whole body focuses on the broken cradle, the only other object in the room. The sweet, nutty colour of the walls drains into the blackness of the cradle’s wood. One of the legs has snapped, and instead of rocking gently from side to side, the cradle lurches always to the right, always away from Marnie. She doesn’t recall how the leg snapped apart, but she does remember the sound it made. The crack could only have lasted a second, but the sound elongates in her mind and she experiences it moment after moment, a fissure ripping through her skull and making her bones shiver. She wants to reach out and touch it. She wants to feel the splinters piercing her fingers and drawing blood. But Marnie does neither of these things. She can only watch and wait.

Inside the cradles lies a still white bundle.

When Marnie can bear sitting no longer, she stands. The night has truly fallen now, though she guesses it must only be late afternoon. She isn’t sure what time her mother is coming home. Her mother had told her what to do and exactly how long she would be out, but the words jumble in Marnie’s mind until it becomes a nonsensical mix of syllables and voices. She blinks and tries to count the minutes or the hours she has been in her playroom, but the time blurs with the water filming over her eyes.

Normally, while she is waiting for something, Marnie makes up a story for herself. She has always been good at building stories full of witches and wizards and all manner of fantastical creatures her mother laughs at. It is one of the skills Marnie prides herself on during the hours choked up in the schoolroom learning about algebra, geological eras and other pointless matters. Marnie would sit and give out all the signs of listening attentively while her mind worked. Now, during the minutes or hours of her mother’s absence, Marnie’s brain has gone into overdrive and ticks again and again with the image of the broken cradle. She tries saying the words to her story out loud, something to do with a goblin going to school for the first time, but her tongue stumbles over it until finally she stops dead.

She listens for the jerk of the latch or the scraping of her mother’s boots on the mat, but the house is coldly silent.

The acid in Marnie’s stomach pops. She imagines drinking a glass of water to trick her brain into thinking she isn’t hungry. She closes her eyes and cups her hand as if around a glass, which she lifts to her lips. Her throat convulses as she swallows and wishes the cool liquid into her mouth and belly. She knows she could help herself to anything she wants in the kitchen, but somehow the knowledge is hidden deep within herself. She drinks her imaginary glass, and for a few moments it seems to work; her stomach goes quiet. Then she opens her eyes and hears the grumbles again.

Next, Marnie tries pacing the room around its triangular walls. She counts seven long paces, then six, then four. Seven, six, four. Seven, six, four. She tries to make it so it is six, five, four, but her legs aren’t long enough to turn seven long paces into six. She tries to jump the distance, but the sound of her landing with a thud makes her stop dead with that, too.

She stands in front of the window, blinks, and turns her back on the broken cradle. She can feel it behind her, but she tries to focus on the world outside instead. She knows it is called a city, this place where she lives, but from what her mother says it is probably the smallest city she’ll ever know. Perhaps the only one, Marnie fears, now that the cradle is broken and the white bundle inside is still. Everyone knows everyone here, or at least everyone knows Marnie; sometimes she forgets other people’s names. Whenever she is out, the people wrapped up in hats and scarves and thick woolly coats all nod down to her and say hello, their voices muffled but still louder and stronger than she likes. They ask how she is, congratulate her on a school report, and Marnie wonders how they know these private things about her. She does as her mother tells her and says hello back, but she looks away as soon as she can.

Now that night has fallen, though, there are none of these loud people out on the streets. Each building glows with light and fires, the colours subtly different depending on the wood or the brick, and Marnie can imagine them drinking and eating and playing games with each other inside. When she was small and her parents first gave her this playroom, Marnie worked a different house and a different family into each of her games. She made up their voices, growling as low as she could for the grandfathers and squealing high for the babies.

Marnie turns back around and sees the broken cradle on the floor. Still there is no sound in the house beyond the grumble of her stomach. The silence works into her ears until it is a loud buzzing in time with the fast beating of her heart. She picks at the scratch on her face without knowing that she is doing so. Fresh blood finds its way into her fingernails. Then, finally, she sits down next to the cradle and rests her hand on the neat cold bundle inside. Her fingers are turning blue. Her lips are red from her teeth biting down on them.

By the time she hears the door to the house opening, Marnie’s legs have cramped. She stays still, even when she hears her mother shouting for her, the sound matched by the increased pace of her heart. She waits for her mother to find her and the broken cradle and the still white bundle inside. She traces her mother’s steps through the house and knows her playroom will be the last place she looks when by all rights it should be the first. Marnie keeps her hand on the bundle in the broken cradle. The scratch running down the side of her face itches. Her mother calls out again and the voice is much closer this time, halfway up the stairs. She’s smiling, Marnie thinks. Her mother is smiling, but she hasn’t yet opened the playroom door.

Marnie closes her eyes on the broken cradle, but still it is there. She lets its fractured wood cloud over her mind. She waits and fears over what is to come. 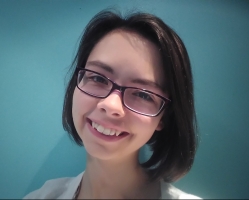 Julia Molloy is a short story writer whose work has appeared or is forthcoming at The Fiction Pool, Fictive Dream, Crack the Spine, STORGY, Platform for Prose and Riggwelter Press. Her work was shortlisted for the Fresher Writing Prize 2016. Julia lives in the UK where she works at a government organisation. Connect with her online and on Twitter: @JRMolloy2