Artistic Statement: The following poems were created using google search auto-complete. The title is the search term. Of the many results that came up, I chose the 4 that I liked best and put them in an order I found beautiful.

If Today Is The Day

If today is the day

If today is the day of the final eternity

If today is the day, so be it

If today is the day I die

If The World Ends

If the world ends

If the world ends tonight

If the world ends tomorrow

If the world ends, where will we go?

When You And I

When you and I were young

When you and I were forever wild

When you and I collided

When you and I were seventeen

We will never sleep

We will never forget

We will never be slaves

We will never be the same

Once Upon a Time

Once upon a time we were burning bright

Once upon a time our lines were colored in

Once upon a time we were falling in love

The child was his warrant

The child was a lone prayer to an empty sky

The child was hit by a train at an amusement park

The child washed up on shore 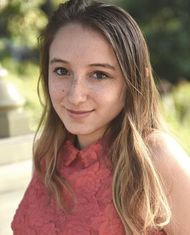 Natalie Lifson is a playwright, producer, screenwriter, and songwriter. At nineteen years old, she has produced or executive produced 16 shows and has written 25 shows that have received productions, including 3 musicals and carious dramas, one acts, and sketch comedy shows. Natalie has won 10 awards for her productions, including Best Playwright and Best Producer. Natalie has also won 142 awards for her writing. www.natalielifson.com