My son was the victim

We were shopping at Burlington Coat Factory,

It was my birthday, a supposedly happy occasion

While my son played with his fidget spinner, I scanned

We had only been in the store a few minutes.

A woman walked pushing a shopping cart, a little

girl was at her side, the child appeared about 6 years-old

The woman stopped and stared at my son who was

entranced by his spinner, ignoring her accusing eyes

“Where did you get that spinner?” she asked.

My son looked at her then at me. Scared & confused.

“That’s my son’s spinner,” I responded. The woman

didn’t look at me. “Are you sure?” she questioned.

Anger flared inside of me. Who did this woman think

she was to question me? Of course, I was sure!

“We have only been in the store a few minutes,” I stated.

My son held his spinner close to his chest.

The woman walked away with her child in a huff, telling

the girl that they would continue their search.

My eyes blazed. My heart pounded. My breathing slowed.

My face contorted into a picture of disgust.

I later learned from another customer that the woman

and her daughter had found the child’s spinner

The woman did not seek us out to apologize.

Apparently accusing my son of theft was no big deal.

My son told me he would never steal. He knows stealing

is wrong. He knows that I wouldn’t stand for thievery.

But my son now knows what it means to be accused

by someone who does not resemble him. 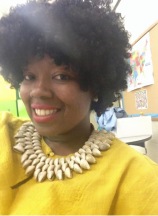 Shirley Jones-Luke is a poet. She lives in Boston, Mass. She has an MFA from Emerson College.