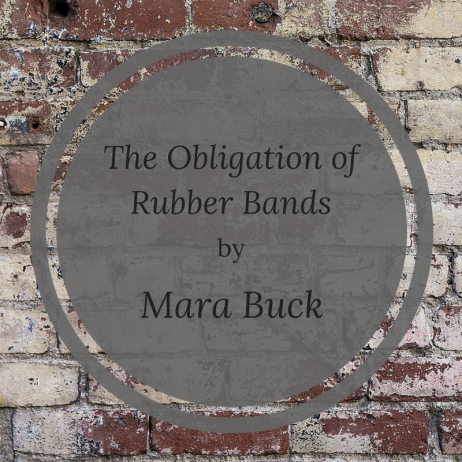 An elastic band breaks, and in quick succession another and another and then another,stinging my fingers with their snapping, and I’m amazed to find my eyes are wet, not from the pain of the stinging, but from the pain of remembrance, that these elastics, these bits of dried and desiccated rubber have lived neglected for so many years, aged to dust within the womb of my mother’s desk.

How can a handful of rubber bands personify an inheritance of shoulds and musts and sacrificing to do the right thing above all else; a legacy of overcrowded drawers and manila files,  the sole remnants of a reality endured; a birthright of keeping the personal hidden yet secretively-neat nonetheless, like the necessity of wearing clean underwear—what if you’re hit by a bus? These corroded fragments (catalysts for the fodder of a woman’s one and only life) embrace bundles of long-paid bills, wedged together as thick as books—The Story Of Our Electricity, The Story Of Our Telephone, How We Paid the Mortgage—volumes and volumes forming an encyclopedia of minutiae. The elastics hug endless stacks of greeting cards in no particular arrangement, birthdays and holidays dutifully acknowledged throughout the years, their darkened glitter and memories of shredded ribbons leaving behind a lonely trail, pleading for someone to follow. Car registrations and insurance papers for the Plymouth family station wagon (the steel of its proud aqua tailfins ultimately scrapped into Toyotas) are bound together with instruction booklets for long-defunct clock radios and television rabbit ears (guaranteed to work or your1960s dollar cheerfully refunded) along with countless recipes for Jello salads and a brochure for a gadget called the Housewife’s Helper—Mother, what in hell were you thinking?

This is not Proust. I notice there’s a decided absence of madeleines. I can’t dwell on what else is absent. Not at this moment.

Mother called them “elastics,” these slender visitors from the Brazilian rain forest that had travelled so much farther than she’d ever imagined, their once-fresh stretchiness now decayed into hair-like strands, sticking stubbornly to mar the surface wherever they cling. I lift the top card from a toppling bundle, its cheery Happy Birthday calligraphy almost obliterated by three-dimensional angry brown slashes, its resolute daisies peeking through, regardless. My father always gave her daisies—bunches pulled from the roadside on his way home from work, enameled costume jewelry pins and one rather pretty sweater guard, printed potholders and tea cozies, plastic pens with plastic flowers attached, hand-painted bone china cups and saucers. Daisies don’t tell; I’ll give you a daisy a day, dear; Daisy, Daisy, give me your answer do; I love you, I love you not. There are lots of cards with daisies. But Dad never signed a one. I sort them through and place them in a separate pile.

My mother inherited this desk from my aunt, whose possessions were passed down as pristine as when they were new. As a child, whenever I visited Auntie’s home, I was allowed (if my hands were clean) to examine the contents of the desk. Treasures! It was full! Of course as an adult I’ve come to realize the items Auntie saved were no more than gift shop memorabilia, but at that time they were as wondrous to me as the archaeological marvels from King Tut’s tomb. Horoscopes printed on tissue paper, rolled into faux cigarettes in their own hinged box—I remember the agony of re-rolling those papers so they’d appear untouched the next time we read them and I was surprised the horoscopes never changed; scented soaps in fancy wrappers, forever unused, their seals intact; embroidery-encrusted hankies from far-off places, lacy edges fragile and yellowing; Kodachrome postcards with scrawled greetings and exotic stamps; costume brooches and earrings wedded to their cardboard packaging; souvenirs mindlessly sent by traveling acquaintances, hoarded by my childless aunt as physical proof of her years on the planet. None of these are defaced by the dreaded elastic bands. They remain aloof and virginal, still within their special drawer, segregated from the effluvia of daily life.

To the world at large, Mother had appeared to be most careful with her possessions, but from an early age, that care was more often than not relegated to me. Now it’s become my duty (my giri, yes) to guard these bits and pieces of Auntie’s life, then of my grandmother’s, and finally, of my mother’s. Mother died a very elderly lady and the desk has aged as well, its writing surface no longer faultless mahogany. The key is lost, the warped drawers stick, and water from an African violet has created concentric rings on the top edge, drizzling down the side, drawing Rorschach patterns on the highly-polished wood. During the time it suffered under Mother’s tenure, I tried to restore it to please her, but now that it’s come to live with me, I’ve decided the desk has earned its scars, as I’ve earned mine, and the desk and I exist in a state of détente. But today I can’t ignore its contents any longer. Those contents have preyed upon my conscience and haunted my dreams for far too long to turn back now. Giri.

Like the secret stipulation of clean underwear, inheriting the detritus of another’s life is giri, a personal moral obligation, a duty unwritten even more presumptive for its amorphous state. I’m the last of the family. There is no one else to comment, to fault me if I were to consign to the dumpster the whole moldy business of files and rotten rubber bands, the cards and the instructions for the beloved Hamilton Beach mixer, the mouse-shredded photos of unknown ancestors. No one left to give a damn. My grandmother would no longer tsk her teeth. My father wouldn’t shake his head. And my mother would not roll her eyes and lecture, “Don’t you think we’d better save that?” But like images indelible on long-forgotten celluloid film hidden within envelopes from the drugstore, their admonishments overflow the drawers of my brain, compelling me to save, but not to savor. Never to savor. That would invite memories too painful to endure. To catalogue her life as I would hope someone in the future may catalogue mine, while knowing there will be no one. That, that is giri. I can only wonder how soon my own rubber bands will erode, spilling the contents of my files over the carpet in the corner.

Some of the desk drawers are so crammed that I remove the bottom one first, then attack the one above, wiggling it out just enough to extract the cards, letters, and ephemera forced behind. The dovetails are groaning, splitting with the weight. The piles of paper are staggering, exploding from their elastic confinements. The final pile, bundled together not with an elastic band but with a pink ribbon, is a stack of cards and letters from me, sent from college, sent from my first job, sent from those years I lived in Mexico. These are as fresh as when I mailed them, savored, not merely saved. Treasured without the marks of rotten rubber.

Someday I’ll read them, I suppose. That won’t be part of my giri—but of my grief. 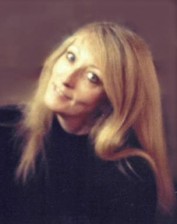 Mara Buck writes, paints, and rants within a self-constructed hideaway in the Maine woods—she hopes to return to civilization one day soon. She’s been published in many of the usual and unusual places, with some awards tossed in, and treasures a personalized rejection from The New Yorker. Current projects include a novel and a collection of strange stories of Maine. Connect with her on Facebook, Twitter, YouTube, and see her art/poetry/video for the World Trade Center Memorial.